Vainradical review of Along Came A Soldier

I love this review because this reader really gets my book and unfortunately that is not happening often enough. My book is dark and distrubing at times and I've had readers dislike it because of that. I know it's not for everyone and reaching readers of historical suspense who don't mind violence and murder is proving to be hard, so when I find a review that takes on board everything I tried to convey, I'm going to keep it. Thank you Radzy.
Posted by Brenda Davies at 06:53 2 comments: 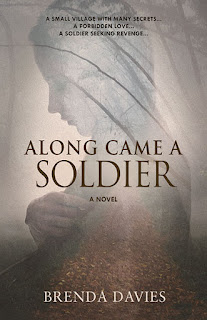 Cover reveal for my latest book.

How exciting is that!

It is avaible on Netgalley now for reviews.

Posted by Brenda Davies at 08:02 No comments:


Amazing. Original. Astonishing. Compelling. Shocking. Disturbing. And I don't know what to write to do this book justice. I loved it, the best book I've read this year, last year, for many years.
The blurb gives the outline. Nine people arrive one night on Chelsea Bridge. They’ve never met. But at the same time, they run, and leap to their deaths. Each of them received a letter in the post that morning, a pre-written suicide note, and a page containing only four words: Nothing important happened today.
That is how they knew they had been chosen to become a part of the People Of Choice: A mysterious suicide cult whose members have no knowledge of one another.
Thirty-two people on that train witness the event. Two of them will be next. By the morning, People Of Choice are appearing around the globe; it becomes a movement. A social media page that has lain dormant for four years suddenly has thousands of followers. The police are under pressure to find a link between the cult members, to locate a leader that does not seem to exist.
How do you stop a cult when nobody knows they are a member?
And so the story unfolds. It is written in the 3rd person AND the collective 1st person. It is in part an instruction maual on how to be the best serial killer ever, by killing the most people and not getting caught. There are details about previous serial killers like Bundy and Shipman, all very well researched. But the manual is spliced and diced with details about those who are about to/have just committed suicide. All of them have a number and some of them have a title like Doctor, Fighter, Nobody. They remain anonymous and yet the author very cleverly makes them real so that the reader cares about them, so that their deaths are heartbreaking. Especially when we realise that they take their own live and yet THEY DON'T WANT TO DIE!!
The writing is caustic and brutal and stark. 'You can feel it. When somebody jumps off a building and hits the floor, you can feel it.
It's the noise. You don't expect the noise.'
'They killed 256 people!
It should have been so many fucking more.'
The author has created a chilling serial killer, who's manual is not only informative, 'The real trick to being the biggest serial killer in history is to learn from all the other fuck-ups. No accomplice. No dependents. No mistakes.' But also highlights the issues of this modern society. 'We are so connected that we have become disconnected.' The killer had many points to make about society and the reasons why he was killing and calling people Nobodies but the book is so cleverly written that the Nobodies, the numbers, the suicides become real and you want to understand their lives and why they didn't want to die, because none of them did.
We do have a hero, an unlikely hero who manages to dodge death. I can't say too much without giving it away, but the ending is pure genius. 'The guy is a goddamned Nobody.'
The whole book is utter genius. It should be made into a film.
Posted by Brenda Davies at 07:23 No comments:


Written from the first person point of view, which is Joe who runs a bookstore and when aspiring author Becks walks in he is obsessed - yes obsessed with her. Joe talks about Becks almost as a running dialogue of what's going on in his head and he refers to Beck as 'you', so the reader has the impression that he's talking to you, making for a very creepy and claustrophobic read, giving me a mouse in my house!!
Joe is a deranged stalker who uses social media to find out about Beck and the people she hangs out with. He very carefully manipulates situations and removes all obstacles that in his mind are in the way of him having a perfect life with Becks. He will go to any lengths to achieve what he wants and he can always find a good excuse for doing what he does.
It isn't normal. Being in Joe's head is scary because yes you feel his passion but with it his insanity, yes you get his humour and charm but also his dark disturbing thoughts, yes you get his oh so funny sense of humour that had me laughing out loud many times but you know it's twisted. He's charming but demented but addictive and you almost wish he was in your life.
And he appears so normal to those around him, not just normal but likeable and clever and witty which is why he gets away with what he does. What would I do if I met someone like Joe? That's a disturbing thought because I'm pretty sure I'd be swept away by his intelligence, humour, good looks and who doesn't want someone who's devoted to you and the sex! Bring it on. But Joe's idea of love is not love, it is a sickness that I only want to experience through reading, that's enough, but what a read.
The writing is excellent, beautifully crafted with constant references to great books and songs from great films, all very cleverly done and making this a unique, compelling and brilliant book.
Posted by Brenda Davies at 06:33 No comments:

An incredible piece of writing. I've read The Dry and loved it, but I have to say, I think this is Jane's best book yet.
The writing is, as usual, exquisite. The author draws you into the pages of the book and transports you to the scorching harsh world of the outback and what a fascinating place that is. So alien to me but brought to life so vividly because of the descriptive writing, that I really felt I was there.
'The headstone threw a small shadow. It was the only shade in sight and its blackness was slippery, swelling and shrinking as it ticked around like a sundial. The man had crawled, then dragged himself around as it moved. He had squeezed into that shade, contorting his body into desperate shapes, kicking and scuffing the ground as fear and thirst took hold.
He had a brief respite as night fell, before the sun rose and the terrible rotation started again. It didn’t last as long on the second day, as the sun moved higher in the sky. The man tried though. He chased the shade until he couldn’t anymore.
The circle in the dust fell just short of one full revolution. Just short of twenty-four hours. And then, at last, the stockman finally had company, as the earth turned and the shadow moved on alone, and the man lay still in the centre of a dusty grave under a monstrous sky.'
How beautiful is that? And the book is chock full of descriptions that make you stop, re-read them and close your eyes, and you're in the Australian outback, you can feel that sun beating down.
In the story, we have three brothers and their extended family. Just enough characters to keep it interesting and for everyone to come to life. It is the elder brother Nathan, that tells the story, through his eyes, and what a wonderful, soulful, lonely character he is. I wanted to jump into the book just to hug him.
The plot is full of intrigue and mystery and the addition of the Stockman's Grave just gave the whole book an extra edge of ghostly suspense. The plot is very believable with the lies and secrets that surround this family and this is one of the things I really loved about the story, it is totally believable. Nathan tries to unravel the mystery of his brother's death and the reader follows him, also trying to make sense of what happened.
This is a captivating, emotional, amazing book and I hope they make this one into a film. The best book I've read this year so far, I loved it.
Posted by Brenda Davies at 09:32 No comments:

This is the last in the 4MK trilogy and I am oh so sad to be saying goodbye to the brilliant cast of characters, especially Porter but mainly Ansom Bishop.
I tried to read this slowly, not wanting it to end, knowing that the author leaves clues scattered around that are so easily missed, but once I started I couldn't stop. A number of nights I had to keep reading into the wee hours and I didn't sleep well after reading this book.
The good news is, I can go back and re-read them all, this time with a different perspective because I know that unpredictable, amazing ending that I could never have guessed. I can try and find all the hidden clues and basically, I'm not ready to say goodbye so I'm not going to.
You must start these books in order, start with The Fourth Monkey and end with The Sixth Wicked Child. I won't talk about the brilliant plot with all its incredible twists and turns, I'm afraid I might give something away. Start this knowing nothing, you'll be blown away. The author's writing is special too, this is not just a plot-driven book, it has deep, believable characters and beautiful writing.
I will add that sprinkled throughout the books are excerpts from Bishops diary's and these, I believe, are a touch of genius. They add an extra depth to an already outstanding novel.
These books are complex, scary, thrilling and totally absorbing. A must-read, I can't stress that enough.
And I cried at the end and not just because I'd finished the book.
Posted by Brenda Davies at 08:30 No comments:


A serial killer who burns people alive! He leaves no clues for the police and draws Washinton Poe into the investigation by carving his name on a victims chest.
I loved Poe who has a dark side and a great sense of humour with an instinct to fight for injustice. This is how he befriends the enigmatic genius that is Tilly Bradshaw. Tilly is on the autistic spectrum, making her childlike innocence an easy target for bullies, but she also has a gritty determination. You can't help but love her.
The murders are full of grisly detail but when the motive for them becomes clear, it is also very emotional and moving.
A great cast of characters, well written and a great plot that keeps you guessing. I'm looking forward to the next book in the series.
Posted by Brenda Davies at 08:21 No comments: